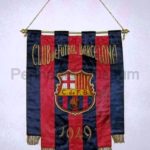 It is a wonderful pennant fully embroidered probably used by azulgrana in occasion of the international matches. This pennant was issued for season 1949 where Barcelona won the Liga and the Latin Cup in the final played in July at Chamartin Stadium of Madrid versus Sporting Lisbon. Late 40s where years in which Barcelona collected many titles (both domestic and international).
It is highly probably that this pennant has been presented to one of the teams against Spanish team played during the first ever Latin Cup played in 1949. In this competition the azulgrana won the semifinal versus French team Stade Reims and Sporting Lisbon in final.