Carpi Football Club 1909 is an Italian football club located in Carpi, Emilia-Romagna. The club currently plays in Serie B. It was founded in the summer of 1909 by local student Adolfo Fanconi as Jucunditas (Latin for “gaiety”), and changed their denomination to Associazione Calcio Carpi a few years later. Carpi played three seasons in the Italian Football Championship, the precursor to Serie A, from the 1919-20 season until 1921-22. Starting from the 1930s, they mostly played between Serie C and Serie D. Carpi achieved their best result in 1997, a third place under coach Luigi De Canio which allowed them to play the Serie B promotion playoffs then lost to Monza. The club was cancelled in 2000 following relegation to Serie D and subsequent bankruptcy. A new club, named Calcio Carpi, was therefore admitted to Eccellenza Emilia – Romagna. The club assumed the current denomination in 2002, following promotion to Serie D and a merger with the second team of the city, Dorando Pietri Carpi, that had just reached Serie D as well. Pietri Carpi also sold its license to Boca. In the season 2009-10 it gets the repechage in Lega Pro Seconda Divisione, given the number of teams in financial difficult. In the season 2010-11 the team from Lega Pro Seconda Divisione was promoted to Lega Pro Prima Divisione. In the season 2012–13 the team was promoted from Lega Pro Prima Divisione to Serie B for the first time ever when they defeated Lecce in the Girone A Playoff Final 2–1 on aggregate. Carpi FC’s first ever fixture at Serie B level ended in a 1 – 0 defeat away to Ternana on 24 August 2013. Their first win came in the manner of a 2-0 victory at Spezia Calcio courtesy of goals from Fabio Concas & Roberto Inglese. Carpi’s first season in Serie B ended in a 12th place finish, only 3 points away from a promotion playoff place, ensuring their place for another season. The 2014-15 Serie B campaign saw Carpi, managed by experienced coach Fabrizio Castori, completing the first season half in a surprise first place, with a record, 43 points and a nine-point advantage to second-placed Frosinone.

Following some pennants of Carpi 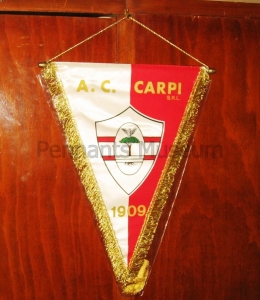 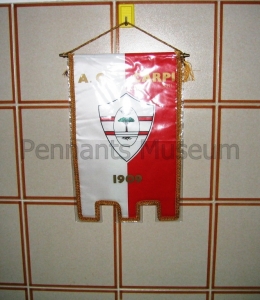 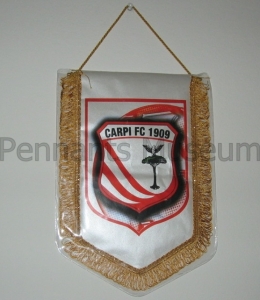 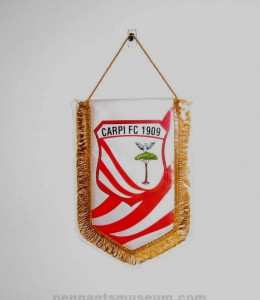 precedenteBRESCIA CALCIO
successivoCITTADELLA AS
Share this ArticleLike this article? Email it to a friend!
Email sent!