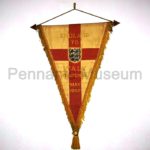 This is the embroidered pennant swapped by captains before the match Italy vs England played in Florence the 18th of May 1952. This match was the last for the strong Italian striker Silvio PIOLA who won with the Azzurri the Rimet Cup in 1938. Italy draw this match 1-1 and scorer were BROADIS for England and AMADEI for Italy.
Pennant show the St George cross over a white background with the three lions in the middle which represent the badge of the English Football Association.
This pennant still shows sign of a possible mistake as under the lettering FLORENCE is still clear wording ROME which was cancelled due to the fact the match was played in FLORENCE.
Apart from this pennant is very rare also because at that age only few pennants were manufactured in this style and most of all were presented to the opponent team only.