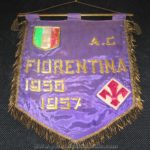 Embroidered pennant issued in the season 1956-1957 commemorating victory of the Italian League conquered in the previous season. Pennant has up left the scudetto with Italians flag colours which champion club can wear on theirs shirts. On the back pennant is in violet with a narrow line in which colours of the Italian flags are. This pennant is a rare one due to the fact that was issued in limited number and for the season 1956-1957 only. It was probably gifted to a captain of a Bulgarian football club before a friendly match.