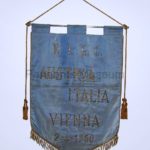 Fantastic pennant swapped before the match Austria vs Italy played in Wien the 2nd of April 1950. Pennant is in very good condition despite its age and of very large dimension. Embroidery in fine hand made gold thread it also has gold thread fringe and cord. On the reverse it has the Italian flag colours. Italian national team use to swap pentagonal or shield shaped pennant at that age before to start to present triangular pennants early 70s.
This match was played for the Central European International Cup a competition held by a certain national teams from Central Europe between 1927 and 1960. Participating nations were Austria, Czechoslovakia, Hungary, Italy, Poland, Switzerland and Yugoslavia. Played as a league on a home and away basis it was contested six times and each single tournament usually took more than two years to complete. It was discontinued in 1960 when the European football Championship started. The tournament of this match was played from 1948 ad it was marked by the advent of the Golden team of Hungary which claimed the trophy after a 3 – 0 win over Italy in Rome in 1953.