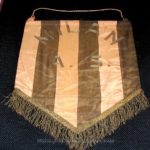 Extremely rare pennant of the one of the most famous football club of Italy that in the 30s played with the name Milan AS. This pennant has been probably swapped between captains before a friendly match played in the tour in Yugoslavia in June 1938 where Milan played two times versus Hajduk Split (on the 5th and 7th of June).

Pennant is in good condition even colours on the front are not like original one (red and black stripes). Wording is embroidered and fringe is in gold bullion thread.

precedenteFIORENTINA A.C.
successivoTRAPANI CALCIO
Share this ArticleLike this article? Email it to a friend!
Email sent!