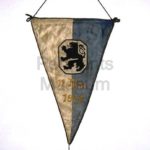 This is one of the oldest pennant of my collection of the German team 1860 München. This pennant was probably presented to the opponent team in the occasion of a Bezirksliga Bayern league match. The Bezirksliga Bayern was the highest association football league in the German state of Bavaria from 1923 to 1933. The league started out with eight clubs from all over the state of Bavaria that played each other in a home-and-away round with the two top teams advancing to the Southern German championship, which in turn was a qualification tournament for the German championship.
Front of the pennant has the club colours with the black lion while on to the back there is the monk who represents the city of München. Pennant is in mint condition even if it is 84 years. It is fully embroidery one (front and back) and it is around 35×45 cm (without tassle).

Turn- und Sportverein München von 1860, commonly known as TSV 1860 München or 1860 Munich, is a German sports club based in Munich, Bavaria. The club’s football team plays in the Second Bundesliga, after relegation from the Bundesliga following the 2003–04 season. The club was one of the founding members of the Bundesliga in 1963 and has played a total of 20 seasons in the top flight