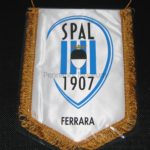 S.P.A.L. 2013, better known as Società Polisportiva Ars et Labor (or simply SPAL) is a professional Italian football club, based in Ferrara, Emilia-Romagna. The club currently plays in Serie B, the second level of the Italian football league system, having last been in Serie A in 1968. SPAL has played its home matches since 1928 at Stadio Paolo Mazza, named after Paolo Mazza (chairman of the club from 1946 to 1977). The club was founded in 1907 as Circolo Ars et Labor by the Salesian priest Pietro Acerbis, then was renamed in 1913 as Società Polisportiva Ars et Labor. The team played in Serie A from 1920 to 1925, then again from 1951 to 1968: their best finish was fifth in the 1959–60 league season. It was refounded in 2005, after a bankruptcy, as Spal 1907. In the summer of 2012, after suffering a second bankruptcy, the club was refounded for the third time as Società Sportiva Dilettantistica Real S.P.A.L. and would begin life in Serie D thanks to Article 52 NOIF of FIGC. At the end of the 2012–13 Serie D season the club took back its original denomination. Giacomense, a club founded in 1967 at Masi San Giacomo, a frazione of Masi Torello had moved to the city of Ferrara; on 12 July 2013, owner Roberto Benasciutti made a deal with the Colombarini family for a merger between S.P.A.L. and Giacomense, with the latter giving its sports title to S.P.A.L. and continuing to play in Ferrara. The club changed its name to S.P.A.L. 2013 in order to continue the soccer history of S.P.A.L. The new club completed the 2013 – 14 Lega Pro Seconda Divisione season in sixth place, thus qualifying for the inaugural unified 2014–15 Lega Pro season. On Saturday 23 April 2016, the squad secured promotion to Serie B for the first time since the 1992 – 93 season. The team’s colours are blue and white.