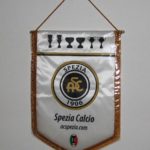 Printed pennant in use in the 2000s with honours

Spezia Calcio is an Italian football club founded in 1906 and based in La Spezia, Liguria. Currently it plays in Serie B, hosting games at the 10,336 capacity Stadium Alberto Picco

In 1944, because of the World War II the Italian football federation decided to split the top league in regional rounds. The team, named 42° Corpo dei Vigili del Fuoco della Spezia (Firefighters of La Spezia) after a merger with the local firefighter to have a sufficient number of players, was included in Round D of Emilia-Romagna, together with Corradini Suzzara, Fidentina, Orlandi Busseto and Parma. Spezia won the round and qualified to the semi-finals, in which it challenged Suzzara, Carpi and Modena. Spezia won also this round, winning five of the six matches played, losing only to Carpi. By winning the semi-final round, Spezia was admitted to play a two-legs play-off against Bologna. The first match, played in Bologna, was suspended because of incidents started after the 1–0 goal of Spezia, contested by the Bologna supporters; Spezia was awarded a 2–0 win because of that. The return match, scheduled to be played in La Spezia, was first moved to Carpi, because of the heavy bombings underwent by the Ligurian city in the period, then cancelled because of protest by Bologna chairman Renato Dall’Ara, so Spezia was admitted to the final without playing the return match. The finals, held in Milan, were played against Venezia and Torino. On 9 July 1944, the first match between Spezia and Venezia was played: it ended in a 1–1 draw, commented by the Gazzetta as “surprising result”. On 16 July, Spezia challenged the Great Torino, with Vittorio Pozzo as coach and Silvio Piola as striker. The match ended in an epic 2–1 victory of Spezia. After the third match, in which Torino beat Venezia in a 5–2 win, Spezia was declared champion. However, the Italian league of 1944 was not immediately considered as official by the Italian federation, because it was obtained during war times in a reduced league, and the only scudetto of Spezia was finally awarded only in 2002 by the Federation, even if not counted officially as an Italian championship triumph, but as a “decoration”. Today, Spezia remembers the 1944 triumph by playing with a tricolour badge on the team’s official jersey (but different from the Scudetto), with the authorisation of the Football Federation. In 2002, the club reached an agreement with Inter, made the club became Inter’s feeder club and reserve team. The team got Goran Pandev, Aco Stojkov (now Macedonian internationals) and Alex Cordaz in the first season. In the second season, Cristian Lizzori, Luca Ceccarelli and Nicola Napolitano was signed from Inter. In 2004–05 season Spezia got Antonio Rizzo from ACF Fiorentina and Paolo Castelli from Inter. Players likes Alex Cordaz, Riccardo Meggiorini and Paolo Hernán Dellafiore joined the team directly from Inter to boost the team in January 2005. The season ended with winning Coppa Italia Serie C. After the season, Inter sold most of the shares of Spezia. The next season (2005–06) started with the arrival of a new owner and a new manager, respectively Giuseppe Ruggieri and Antonio Soda. After a long battle for the first position with rivals Genoa C.F., Spezia were crowned Serie C1 champion and promoted to Serie B after 55 years of absence. The squad included Vito Grieco, Massimiliano Guidetti, Giuseppe Alessi, Massimiliano Varricchio and Roberto Maltagliati. Life in a Serie B with powerhouses Juventus, Genoa C.F.C. and S.S.C. Napoli was difficult for the newly promoted Ligurian side, which themselves were fighting to avoid the relegation spots. With mid-season signing Guilherme do Prado, Tomás Guzmán, Corrado Colombo, the old member Massimiliano Guidetti’s good form and Nicola Santoni, Spezia survived in Serie B, gaining participation in the playout round after a late 3–2 victory in Turin against Juventus. Spezia then survived by winning the playout round against Hellas Verona. But in the next season, with Isah Eliakwu, Colombo and Do Prado, the club failed to make the miracle happened twice, primarily due to a troubled situation in the financies of the club. In 2008, due to financial difficulty and following their relegation from Serie B, the club was forced to declare bankruptcy. In June 2011 FIGC sanctioned numbers of former board member of old Spezia for sports fraud. The team was refounded in 2008 as A.S.D. Spezia Calcio 2008 by Gabriele Volpi the owner of water polo team of Pro Recco and Croatian side HNK Rijeka, winner of numerous scudetti and admitted to Serie D, thanks to Article 52 NOIF of FIGC. Upon promotion in Lega Pro Seconda Divisione at the end of the Serie D 2008-09 season, A.S.D. Spezia changes its denomination in the current “Spezia Calcio”. Spezia finished Girone A of Lega Pro Seconda Divisione as 2nd and qualified for promotion play-offs in 2009–10 season. Spezia defeated Pavia at semifinal and Legnano at final and promoted to Girone A of Lega Pro Prima Divisione with making second consecutive promotion. The club in the season 2011–12 obtains for the first time in Lega Pro a prestigious “triplete”: winning the Coppa Italia Lega Pro, winning also the Supercoppa di Lega di Prima Divisione, after having previously promoted from Lega Pro Prima Divisione/B to Serie B, retrieving well 11 points in only two last months at Trapani.

Permanent link to this article: https://www.pennantsmuseum.com/spezia-calcio-a-c/