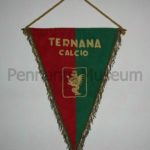 Ternana Calcio is an Italian football club based in the city of Terni, Umbria. The club was founded in 1925 and refounded in 1993. In its history, Ternana have twice played in Serie A (seasons 1972–73 and 1974–75) and 27 times in Serie B. The club is currently playing in Serie B. The first team from Umbria to reach Serie A, Ternana enjoy a local rivalry with Perugia, and play their home matches at the Stadio Libero Liberati. The club was founded in 1925 as Terni F.B.C after the merger between Terni Football Club and Unione Sportiva Ternana, reaching the II Division in 1926 and the I Division (nowadays known as Serie B) just a year later. The club, however, folded in due to financial difficulties, being refounded in 1929 as Unione Fascista Ternana (a denomination that was common during the Italian fascist regime). Folding again in 1933, the club returned to footballing action in 1935 under the name Polisportiva Mario Umberto Borzacchini, after a racing car driver and a native of Terni who had died at the 1933 Monza Grand Prix. In 1938 the new club reached promotion to Serie C, missing a second consecutive promotion the following year. In 1946, after the World War II, football restarted in Italy and Ternana played in the Serie B, missing promotion for two consecutive years, and being relegated to Serie C in 1949 and IV Serie in 1950. A third relegation, this time to Promozione, came in 1953, and was followed by two years in the regional division for Ternana before returning to IV Serie in 1955. The club returned to Serie C in 1964, and Serie B in 1968, the latter under coach Corrado Viciani. In 1972, Ternana finally won Serie B and reached Serie A for their first time, again with Viciani as coach. However, the club did not prove to be ready for Serie A, as they were promptly relegated in their debut appearance in the top flight, managing only three wins in 30 matches. In 1974, again in Serie B, Ternana managed to reach one of the three top spots, winning their second promotion to Serie A; this was, however, followed by yet another sad relegation. In the following years, despite a number of noted head coaches such as Edmondo Fabbri, Cesare Maldini and Renzo Ulivieri, Ternana did not manage to return in the top flight, and instead were relegated to Serie C in 1980, despite a prestigious run in the Coppa Italia 1979–80, where Ternana reached the semi-finals, being then eliminated 3–1 on aggregate by Roma. During the 1980s Ternana played between Serie C1 and Serie C2, before going bankrupt on 12 December 1987. Managed by an official liquidator, Ternana ended the season and escaped relegation. The club, bought in the summer of 1988 by a consortium headed by Gaspare Gambino, won promotion to Serie C in 1988–89 after winning the penalty shootout in a playoff against Chieti. Successively, Ternana won Serie C1 in 1992 and marked their return to Serie B. The promotion was, however, followed by financial troubles that prevented new signings. At the end of the season, which the team finished in the last position, Ternana went officially bankrupt. On the summer 1993 the club was refounded as Ternana Calcio and was being forced to begin again from Serie D. In their first Serie D campaign, Ternana missed promotion, ending in third place behind Teramo and local rivals Narnese. This was followed by another unsuccessful attempt, as Ternana lost promotion to Viterbese; despite this, the club was later readmitted to Serie C2 to fill a league vacancy (ripescaggio). In 1996–97 and 1997–98, with a new president and Luigi Delneri as head coach, Ternana won two consecutive promotions, thus returning to Serie B. Ternana played Serie B from 1998 until 2006. In 2004 missed a promotion in Serie A finishing 4 points behind Fiorentina. In 2006 they were relegated to Serie C1 ( 2008–09 Lega Pro Prima Divisione).

In the season 2010–11 the club was relegated to Lega Pro Seconda Divisione after losing the play-out, but it was later readmitted to Lega Pro Prima Divisione in 4 August 2011 to fill vacancies.In the following season 2011–12 it was promoted from Lega Pro Prima Divisione to Serie B. Back in Serie B, Ternana has avoided relegation as well as play-outs for 4 consecutive seasons. The team’s colours are red and green. It is the only Italian professional team with a red and green combination.