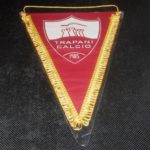 Trapani Calcio is an Italian football club located in Trapani, Sicily. They are nicknamed the Granata (the Garnets), after their kit colour. During the club’s history they have played mostly in the Serie C and D leagues. In the 2013–14 season, they played in Serie B for the first time in the club’s history. To date the highest league position the club has finished after the 1929–30 season was 2nd in the third highest level of Italian football, a position the club attained 3 times, in the First Division during the 1934–35 season, in the Serie C during the 1960–61 season and again during the 1962–63 season. Before the 1929–30 season, the club played for one season at the then highest level football division in the 1921–22 season, but retired during the championship, forfeiting the last 6 matches. In recent years, the highest league position the club attained was 4th in the third highest level of Italian football, then called Serie C1, during the 1994–95 season, a result that was bettered in the 2011–12 season when Trapani achieved a second place in the same division. Throughout their long history, Trapani have won at least six recorded league championships in various divisions. The club’s roots can be traced back to 1905; on 2 April of that year, local newspaper the Gazzetta di Trapani ran an advert requesting young people to form a football association for Trapani. The club founded, by professor Ugolino Montagna and young native Abele Mazzarese to represent the West-Sicilian town was named Unione Sportiva Trapanese. It is one of the oldest teams on the island, after Palermo and Messina. U.S. Trapanese’s first president was Giuseppe Platamone and the club played their games at Via Spalti. The first official game for the club came against Palermo in October 1908, the more experienced Palermitan team won emphatically scoring 12 goals. The Trapanese bounced back, however, playing local derbys against teams from Marsala and Erice. In 1915 play was stopped because of World War I. After the war, in 1921 three teams had risen up; Vigor, Bencivegna and Drepanum. During the 1921–22 season Vigor finished 6th in the Sicilian section of the national championship of the C.C.I. (Confederazione Calcistica Italiana). On 22 January 1923 a merger took place between Vigor and Drepanum, the club decided to revive the previous name U.S. Trapanese. In June 1926, the name of the club was changed to A.S. Trapani. In the 1930–31 season, under the name Juventus Trapani, the club won promotion from III Divisione into II Divisione, the following season they achieved promotion again this time into the early 1930s equivalent of Serie C. They finished 8th in Serie C in the 1942–43 season, but then football in Italy was put on hold for the Second World War. Just after World War II, the club were using the name A.S. Trapani for one season, before changing its name to A.S. Drepanum. They were entered into Serie C, which, at the time, was divided into many regional groups. For the 1947–48 season, they qualified for the new, smaller Serie C; even finishing above Messina. Unfortunately for the club, they were relegated down to Serie D, in the 1949–50 season after finishing second from bottom. With former Serie A player Ignazio Arcoleo as head coach, Trapani experienced two consecutive promotions from Serie D to Serie C1 in the early 1990s. In 1995, a strong and qualified team composed mostly of young promising players such as Marco Materazzi and more experienced local footballers such as Francesco Galeoto qualified to the promotion play-off, but ultimately lost to Walter Novellino’s Gualdo in the semi-finals with a late goal scored on injury time. After that, Trapani experienced a slow but continuous decline, despite attempts to repeat past successes: Arcoleo left Trapani to coach Palermo along some of the best players, including Galeoto. The club then relegated to Serie C2 in 1997, Serie D in 2000 and even Eccellenza in the 2005–06 season, despite a late attempt by Arcoleo and former star Gaetano Vasari to save the team from relegation. In addition, the club also received a 12-points deduction for the 2006–07 season following a match fixing attempt recognized by the Football Federation. In its 2006–07 Eccellenza campaign, Trapani, coached by former Parma midfielder Tarcisio Catanese, ended the regular season phase to eleventh place, and saved from relegation after having won relegation play-offs to Terrasini in a 5–0 single-legged win. From 2007 onwards Trapani competed in the Serie D with little success. In 2009, chairman Vittorio Morace appointed Roberto Boscaglia as new head coach, with the aim to bring the club back into professionalism; in his first season in charge, Trapani ended as runners-up behind Milazzo. However, later in August, due to the high number of resignations of clubs in the higher ranks, Trapani was admitted into the 2010–11 Lega Pro Seconda Divisione (formerly Serie C2), thus ending the club’s 13-year absence from the professional ranks.

In 2010–11, Trapani finished as runners-up in the Lega Pro Seconda Divisione group C, and successively won the promotion play-offs to Lega Pro Prima Divisione. In the first campaign in the third tier, Trapani surprised everyone by topping the league against all odds; an end-of-season crisis, however, led to the Sicilians being overtaken by Spezia in the penultimate week of the season and losing direct promotion. In the subsequent promotion play-offs, Trapani defeated Cremonese in the semi-finals, but then lost a two-legged final to fourth-placed outsiders Lanciano. In the following season, however, Trapani were crowned champions (this time in group A) and finally promoted to Serie B for their first time ever. In 2015-16, with Serse Cosmi as their coach, they finished in 3rd place, losing to Pescara in the play off final. However, they started off the following season badly, sacking Cosmi on the 30th November with the club in last place. The appointment of Alessandro Calori saw an improvement in form, and the ended the season in 19th place, sitting in the relegation play off spots. Unfortunately, 18th placed Ternana finished five points above the Granata, meaning the club were relegated back to Lega Pro.