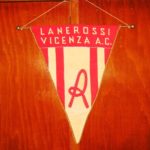 Vicenza Calcio is an Italian professional football club based in Vicenza, Veneto. Founded in 1902 as Associazione del Calcio in Vicenza, they became Lanerossi Vicenza in 1953. It is the oldest team in Veneto, officially founded on 9 March 1902 by the then dean of Liceo Lioy, Tito Buy, and the physical education teacher of the same school, Libero Antonio Scarpa. The club currently plays in Italy’s Lega Pro, having spent the entire 1960s, most of the 1970s and a large part of the 1990s in Serie A. Vicenza took place for the first time in the Italian Championship in 1911, reaching the finals for the title, but they were defeated by Pro Vercelli, one of the best Italian teams in that period. During the 20s and the 30s, the team played in lower divisions, reaching the first division for the first time in 1942. In the last round of the season, a 6–2 win versus Juventus, in Turin, meant a final relegation escape. In 1947, Vicenza finished fifth in Serie A, but the following year was relegated. The early 1950s were quite troublesome, due to economic problems, but in 1953 it was bought by Lanerossi, a woolen firm from Schio, with the side being renamed Lanerossi Vicenza.

Between 1955 and 1975 Vicenza never left the top level, always putting a hard fight against more established clubs. In this period the side was also known as Nobile Provinciale (Noble Provincial). In 1964 and 1966 it finished 6th, with the Brazilian Luis Vinicio finishing league’s top-scorer in the former, with 25 goals. In 1975 the club was relegated but, after winning the 1976–77 second division, would eventually finish runners-up in the following season, as a young Paolo Rossi led the scoring charts, at 24 goals. In that year the side was nicknamed Real Vicenza. Club chairman Giuseppe Farina had just bought the striker from Juventus for a then record fee of 2.6 billion lire, but the team would eventually drop two levels in just three seasons. In the mid-1980s, Roberto Baggio started his career at the club, leading it to the Serie B. In 1986 Vicenza achieved a top flight promotion that was subsequently denied due to its involvement in the second Totonero match-fixing scandal. The club was soon relegated back to Serie C1. In 1990 Vicenza took back its current name and was promoted to Serie B in 1993, thanks to coach Renzo Ulivieri. His successor, Francesco Guidolin, took the team back to Serie A in 1995, and led it through successive positive seasons: after finishing ninth in the league, the club won the 1996–97 Italian Cup after a 3–1 aggregate win over Napoli, eventually reaching next year’s Cup Winners’ Cup semi-finals, being defeated by Chelsea, after winning the first leg in Vicenza for 1–0. In 1999 the team was relegated to Serie B and, after a return to the top flight in 2000–01, was relegated to Lega Pro Prima Divisione in 2005, after losing the relegation playout against Triestina, only being readmitted to Serie B after Genoa was relegated by the F.I.G.C.. In the season 2011–12 the club was relegated to Lega Pro Prima Divisione after losing the relegation play-off against Empoli. Vicenza, however, were reinstated in Serie B at the eve of the 2012–13 season in place of Lecce for its role in the 2011–12 Italian football scandal. In the season 2012–13, Vicenza Calcio finishes the tournament in 19th place, losing the right to play the play-out and leaves the Serie B having lot of problems regarding financial funds to join Lega Pro (third league of Italian football). Vicenza ended the 2013–14 season in fifth place, being successively defeated by Savona in the promotion play-offs, and were due to play the 2014–15 season in the unified Lega Pro division, that would have featured an unprecedented crosstown derby against Real Vicenza. Following the dissolution of Siena, Vicenza were promoted to become the 22nd team in Serie B. Vicenza relegated again 2016–17 Serie B.

On 5 June, Alfredo Pastorelli resigned as the chairman. Despite financial trouble declared by Pastorelli, Luxembourg-based Boreas Capital Sàrl announced to buy the club on 10 July 2017.