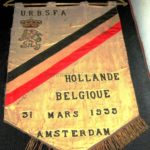 Pennant presented to the captain of the Dutch national team in occasion of a friendly match played in 1935.

Pennant is in silk with lettering and the Belgium F.A. badge embroidered in gold bullion thread. It is a large pennant (it is around 40×50 cm) with some trace of the age (some fringes are missed and stuff is not in good condition).

Due to the fact that it comes from a swap on the pitch I can consider it one of the best pennant of my collection. I got it some months ago from a worker who spent same years as member of the staff of the Dutch F.A. training centre in ZEIST.

precedenteBOLOGNA A.G.C.
successivoREAL MADRID
Share this ArticleLike this article? Email it to a friend!
Email sent!