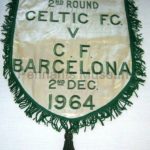 Very rare match pennant presented to Barcelona in occasion of the Fair cities Cup 1964 – 1965 second leg match played in Glasgow on the 2nd of December 1964 and ended in a 0-0 draw.
Pennant is a very large one with the whole front embroidered with details of the match. Scottish team use to present such a kind of pennant with adding in certain occasion also the club crest.

precedenteRANGERS GLASGOW
successivoUS PALERMO
Share this ArticleLike this article? Email it to a friend!
Email sent!