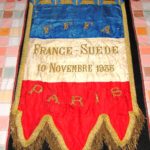 French first national team used to swap this kind of pennant which is a huge and fully embroidered one. It is 90 cm long and 50 cm large and I think that pennants were manufactured in this size for first national team only. As all pennants of same kind it has a metal label on wooden bar which shows name of the company which manufactured pennants at that time. French used this kind of pennant until half of the 50s when they choose for a triangular shape pennant with logo of federation and colours of national flag. Hereunder some pictures took from the web which show various kind of the French national team pennant.

precedenteFERENCVAROS
successivoJUGOSLAVIA FOOTBALL ASSOCIATION
Share this ArticleLike this article? Email it to a friend!
Email sent!