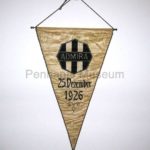 Stunning embroidered pennant of large size of the Austrian team Admira Wien presented to the Spanish team CD Europa in occasion of the friendly match played the 25th of December 1926. Pennant is fine handmade embroidered with the club crest and details of the match. Back of the pennant is in black.
This pennant is in line with Austrian tradition of pennants that at this age were mainly triangular in shape and of very big measures.
SK Admira Wien is a former football club from Vienna. It was founded in 1905 by a fusion of two club that played in the Jedelsee area of Vienna. The most successful era of the club was in the years between 1926 and 1939 when the club reached Austrian national titles and three Cups. After the Second World War they only reached one title in 1966 and three cup victories. In 1971 the club merged with Wacker Wien and was renamed Admira Wacker. Later in 1997, after financial problems Admira Wacker was merged with VFB Modling.