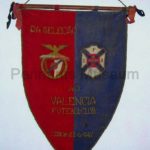 Extraordinary and huge pennant issued for the friendly match Benfica & Belenenses selection vs Valencia CF played in Lisbon the 22nd of June 1947. It is red and blue to the front and back as this colours represents Benfica and Belenenses teams. It also has badge of the clubs finely hand made embroidery with lettering embroidered in gold thread.

The reason for why this pennant is extremely rare is that Benfica & Belenenses selection wasn’t a club but a team composed by players came from these clubs from Lisbon and this team played only few games in late 40s. This is for sure pennant presented to the captain of Valencia before the match.