Associazione Calcio Cesena is an Italian football club based in Cesena, Romagna.
The club was formed in 1940 and won the first promotion to Serie A in the 70s. Since then the club have been in the Serie A for a total of 11 seasons reaching the best achievement in 1976 with a sixth place finish and a short run in the following season’s UEFA Cup. The club currently plays in the Serie A.
Team’s colours are white and black and the home ground is Stadium Dino Manuzzi.

Following some pennants of Cesena (embroidered and printed). 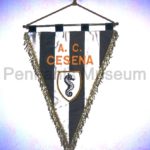