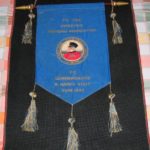 This pennant had been gifted to the Swedish Football Federation by Chelsea in occasion of the tour in Sweden of 1947. Chelsea played three matches in Swedish from the 3rd of June to the 11th of June 1947 versus IFK Norkopping and selection teams of Sweden and city of Gothenburg. This pennant shows the first ever Chelsea badge. Chelsea have had four main crests, which all underwent minor variations. The first, adopted when the club was founded, was the image of a Chelsea pensioner, the army veterans who reside at the nearby Royal Hospital Chelsea. This contributed to the club’s original “pensioner” nickname, and remained for the next half-century, though it never appeared on the shirts. When Ted Drake became Chelsea manager in 1952, he began to modernise the club. Believing the Chelsea pensioner crest to be old-fashioned, he insisted that it be replaced. A stop-gap badge which comprised the initials C.F.C. was adopted for a year. In 1953, the club crest was changed to an upright blue lion looking backwards and holding a staff.
It was based on elements in the coat of arms of the Metropolitan Borough of Chelsea with the “lion rampant regardant” taken from the arms of then club president Viscount Chelsea and the staff from the Abbots of Westminster, former Lords of the Manor of Chelsea. It also featured three red roses, to represent England, and two footballs.[62] This was the first Chelsea crest to appear on the shirts, in the early 1960s. In 1986, with Ken Bates now owner of the club, Chelsea’s crest was changed again as part of another attempt to modernise and because the old rampant lion badge could not be trademarked. The new badge featured a more naturalistic non-heraldic lion, in white and not blue, standing over the C.F.C. initials. This lasted for the next 19 years, with some modifications such as the use of different colours, including red from 1987 to 1995, and yellow from 1995 until 1999, before the white returned. With the new ownership of Roman Abramovich, and the club’s centenary approaching, combined with demands from fans for the popular 1950s badge to be restored, it was decided that the crest should be changed again in 2005. The new crest was officially adopted for the start of the 2005/06 season and marked a return to the older design, used from 1953 to 1986, featuring a blue heraldic lion holding a staff. For the centenary season this was accompanied by the words ‘100 YEARS’ and ‘CENTENARY 2005/2006’ on the top and bottom of the crest respectively

precedenteSPANISH F.A.
successivoFERENCVAROS
Share this ArticleLike this article? Email it to a friend!
Email sent!