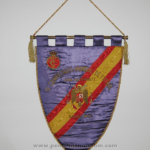 Large hand embroidered pennant of the Spanish first national team presented to Sweden in occasion of the final round match of the FIFA world cup played in Brazil 1950. Pennant is in mint condition with badges of the Spanish football federation and the Spanish national used at that time together with golden threat letters regarding mentioned competition. Nothing to compare with pennants that Spain F.A. currently swaps that are poor of quality and less nice than this one.
It was based on elements in the coat of arms of the Metropolitan Borough of Chelsea with the “lion rampant regardant” taken from the arms of then club president Viscount Chelsea and the staff from the Abbots of Westminster, former Lords of the Manor of Chelsea. It also featured three red roses, to represent England, and two footballs.[62] This was the first Chelsea crest to appear on the shirts, in the early 1960s. In 1986, with Ken Bates now owner of the club, Chelsea’s crest was changed again as part of another attempt to modernise and because the old rampant lion badge could not be trademarked. The new badge featured a more naturalistic non-heraldic lion, in white and not blue, standing over the C.F.C. initials. This lasted for the next 19 years, with some modifications such as the use of different colours, including red from 1987 to 1995, and yellow from 1995 until 1999, before the white returned. With the new ownership of Roman Abramovich, and the club’s centenary approaching, combined with demands from fans for the popular 1950s badge to be restored, it was decided that the crest should be changed again in 2005. The new crest was officially adopted for the start of the 2005/2006 season and marked a return to the older design, used from 1953 to 1986, featuring a blue heraldic lion holding a staff. For the centenary season this was accompanied by the words ‘100 YEARS’ and ‘CENTENARY 2005/2006’ on the top and bottom of the crest respectively

precedenteAS ROMA
successivoCHELSEA FC
Share this ArticleLike this article? Email it to a friend!
Email sent!