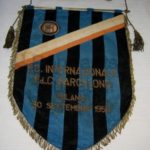 This pennant has been presented by the Italian team to Barcelona in occasion of the inter cities fairs cup match played in Milan the 30th September 1959. It was the second leg of the quarter – final of the Inter cities fairs cup and the azulgrana produced a magnificent exhibition and they won the match 4-2. It is a very large pennant with details of the match embroidered. Internazionale used to swap shield shape pennants at this age with team colours on the pennant front. This pennant has the Italian flag in diagonal above the wording not common for pennants of the Italian team for the years ahead. Also noted that pennant has a mistake in wording has it is F.d. C. BARCELONA instead of C. d. F. BARCELONA. Nevertheless it is a very rare unit in overhaul good condition despite the age and some stains on the front.