Italy has a great tradition on pennants as captains usually swap pennants before to start the match. This is an old habit that isn’t follows in other nations where pennants are mainly swapped in occasion of international matches.
Despite of this in Italy we can surely tell that teams has swapped pennants since to the first championship. At the very beginning pennants weren’t frequently swapped between captains and they were gifted to other clubs for special occasion (see picture below). 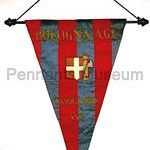 For sure all the Italian pennants of 30’s and 40’s were embroidered and manufactured with precious embroidered of different kind. As far as shape of pennants is concerned they were mainly triangular with club details embroidered and details of the match too (see picture hereunder). 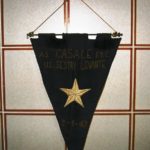 Most of pennants of the 30’s were with “fascio littorio” badge which recognizes the fascist era. Apart from this some pennants where also with badge which was awarded to the winner of the Italian championship (see picture below) 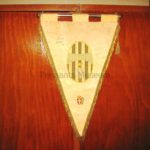 A 30’s pennant of JUVENTUS signed by Pietro RAVA