Following the “golden age” for pennants of the ‘30s, before the 2nd World War pennants in Italy were still of very high quality and hand embroidered.
In this period some teams were used to present pennants with detail of the season like in the picture hereafter. Not only few teams had this habit as at the least two/three Italian top teams swapped pennants with details of the season (e.g. A.C. Brescia and A.C. Torino). 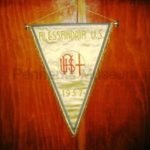 Apart from those kind of pennant Italian teams presented to the opponent team also pennants with details of the match. Not always this pennants were with details of the rival as were embroidered on pennant only date of the match. Hereunder an example of this kind of pennant which has been presented by A.S. Roma to another team before the start of the Italian championship in 1950. 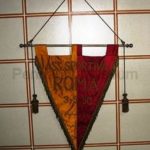 In sign of friendship Italian clubs swapped also in occasion of the international matches pennants with details.
FC Internazionale swapped big pennants of very high standard even if in certain cases with some mistakes.
Just for give you an example have a look at the following pictures in which it is wrong the acronyms of the Club de Futbal Barcelona (FdC instead CdF) on the pennant presented by FC Internazionale to the Spanish team before the for the Inter cities fair cup match played in September 1959.
In any case in my personal opinion this mistake gives to this pennant much more worth and much more wished by soccer pennants collectors. 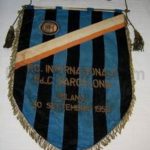